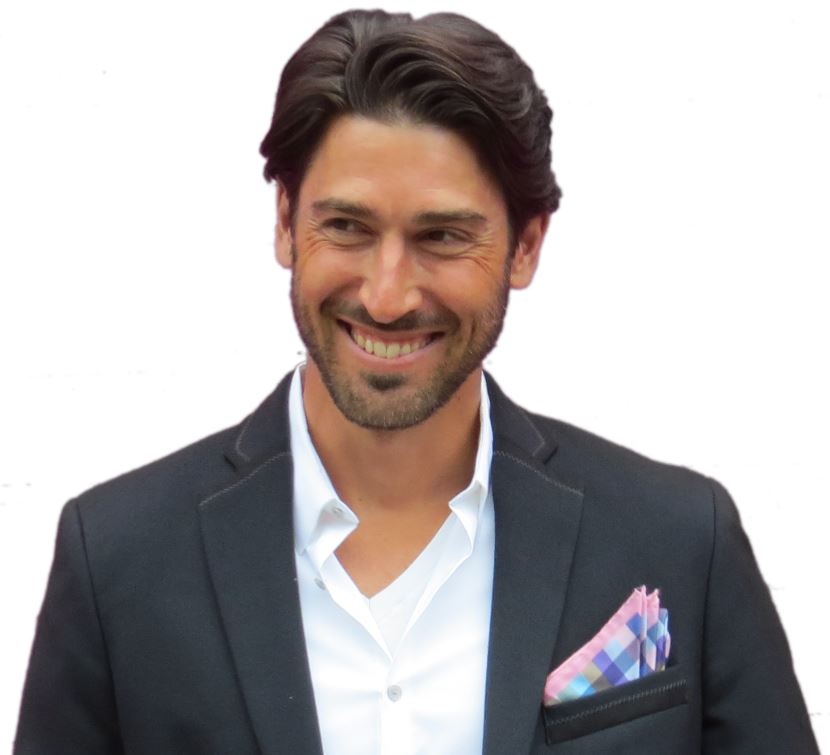 by Patrick Bremer • in Dust Control

Dust Control Without Sacrificing the Environment

Most tend to forget about their waste as soon as it leaves their property, which makes sense - out of sight, out of mind. The denial of scientific evidence at the highest levels of government about the state of the planet and our impact on it can have the dangerous effect of lulling us into a false sense of security. Not only that, but trash and global warming are generally not two things that most people would consider as having any sort of connection.  However, in many parts of the country, a very real and strong connection can be made every day at your local landfill.  Due to strict state and local air quality regulations, landfills are required to control the dust that kicks up from the haul roads that lead from the main entrance to the dumping point, often a half mile or more in length.  Based on our work experience across the industry, we know that the vast majority of landfills rely on spraying water as their primary dust suppressant tool.  By keeping the haul roads damp, landfill operators can reduce their dust emissions dramatically.  However this method of Dust Control is a major cost - both to the operation’s bottom line and in many cases to the environment. 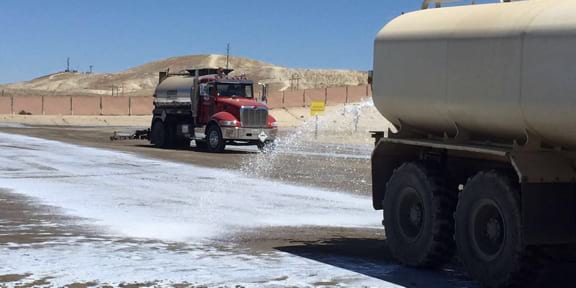 The hard costs associated with this approach are usually pretty easy to quantify….. gas, hourly wage for the driver and maintenance on the water truck. What are some of the soft costs, particularly those associated with water usage in extremely dry regions and its subsequent impact on the environment?

In 2016, by examining NASA satellite images over a 12 year period, researchers found that historically “wet” regions are getting “wetter” and “dry” regions are getting “drier.”  Included in one of the many global “dry-getting-drier” regions is the southwestern area of the United States including, Nevada, Arizona and drought-plagued California.  Additionally, in another 2016 study, the National Center for Atmospheric Research found that rain causing weather patterns in this same region are become rarer.  With less and less water coming from the skies, many landowners, towns and municipalities have been forced to tap into precious, underground aquifers in order to ensure that demand can be met.  In decades past, this was a common practice necessary to get through the occasional droughts.  But now with less snow, ice melt, and rainfall during non-drought years, these aquifer are not being sufficiently replenished, as they were in decades past, making water conservation all the more critical.

LANDLOCK has the ability to convert those gravel roads into smooth, stable and fully “paved” surfaces that can result in long-term costs savings for the customer and a net positive for the environment because the biproduct of a paved surface is a dust free one.

While state governments have been taking more aggressive measures to manage underground water supplies, as demonstrated by California’s passage of the Sustainable Groundwater Management Act in 2014, the private sector will need to play a much larger role in order to prevent future crises.  The agriculture sector which is by far the largest consumer of water is an obvious target for regulators and hopefully it will lead other industries in rolling out new water conservation initiatives. Every industry, however, that uses water in large and sometimes wasteful quantities, should also look for ways to use less and conserve more.  Based on our work, the waste disposal industry is certainly one of those industries that could and should find more ways to reduce their water consumption.

If you’ve ever visited a landfill, you know that they can be very busy, complex and increasing sophisticated facilities, often times managing hundreds of inbound and outbound haul trucks delivering thousands of pounds of trash, six days a week.  As larger companies likes Waste Management and Republic Services continue to make efforts to go “green,” many landfills are now harnessing the natural gas that is the bi-product of decomposition on a massive scale.  Once past the scale house at the main entrance, almost all of the roads are unpaved, comprised of dirt and often covered with gravel which helps the trucks get traction.  Needless to say, due to the heavy volumes of trucks, this layer of gravel is very quickly pulverized and subsequently turns into a dusty mess that needs to be controlled in order to meet strict air quality regulations.  An additional challenge to having these unstablized (unpaved) haulroads is that they require very regular and disruption road maintenance like regrading and recompacting. 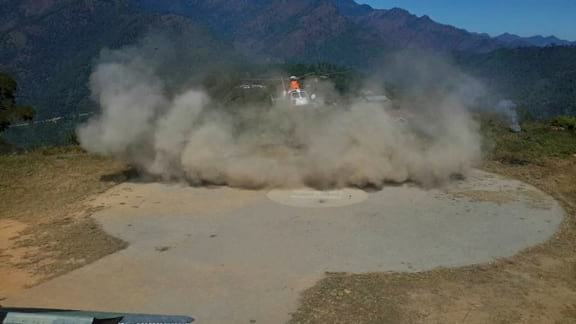 The most common approach to dust control at landfills is to simply keep the roads damp/wet (with water).  In some parts of the country, this could mean running a water truck around the property a couple of times a day.  In other places, like the dry, southwest, it means continuously running a water truck from open to close.  In these cases, the amount of water consumption is staggering and can range between 1 - 1.5 million gallons per month depending on the size of the site.  While using water as a dust control solution can be economical, it certainly isn’t the best way to protect the local water supply and maintain the integrity of local aquifers.

Fortunately, industry leaders like Waste Management and Republic Services are beginning to rethink the way they approach dust control and in some cases they are utilizing LANDLOCK’s proprietary and environmentally-friendly polymeric emulsions as an alternative to the traditional approach.  LANDLOCK has the ability to convert those gravel roads into smooth, stable and fully “paved” surfaces that can result in long-term costs savings for the customer and a net positive for the environment because the biproduct of a paved surface is a dust free one.  Over time, there will be dirt and other material that is tracked onto a LANDLOCKed surface that can become dusty, however, the solution for that is to simply sweep it clean, as opposed to watering it down.

In terms of constructing a LANDLOCK roadway, the process is incredibly efficient if the proper tools and machinery are used, the most critical of which is called a reclaimer or soil stabilization machine.  Working in tandem with a water truck, these machines have the ability to integrate LANDLOCK’s products into the gravel at a specified depth (usually 5-6 inches) and at a specific application rate.  For a more in-depth look at our installation process:

At the end of the day, environmentally stewardship is everyone’s responsibility and it should be taken very seriously based on all the recent studies showing just how fragile Mother Earth is.  Just as corporations should look for simple ways to reduce their environmental footprint, so too should individuals like you and me.  It all adds up!

Patrick Bremer is the Director of Business Development for LANDLOCK Natural Paving, Inc. and is based in Los Angeles, California. He has worked extensively in the waste disposal industry and has a passion for environmental conservation and building awareness of critical environmental issues.

Connect with me on LinkedIn.

LANDLOCK® was founded in 2009 with the goal of reducing the waste associated with traditional road construction methods and ultimately changing the world’s expectations regarding timeframes, budgets, and locations when it comes to infrastructure development. Our proprietary and environmentally-friendly, polymeric emulsions allow private, public and military entities to truly develop Smarter Infrastructure.

We started LANDLOCK® to work with organizations who share our passion for reducing waste and who want to make a positive impact in communities near and far. There are a lot of roads that need to be built and LANDLOCK® is definitely in it for the long haul. We would welcome the opportunity to chat with you, so we can decide together, if we are the right fit.

This email address is being protected from spambots. You need JavaScript enabled to view it.